One of the new features of Access 2010, (and one that will probably get the least ink because it is so simple), is the ability to add Calculated Fields in both Access and Access Services databases. 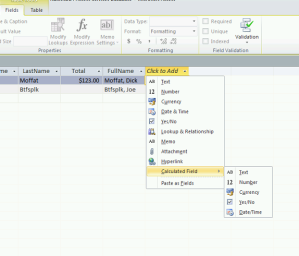 A Calculated Field is simply a Data Type you can select from the list of Field-types.

The obvious uses of this feature would be an extended total based on a quantity times a price.  This would make reporting a lot easier for users without Access or SQL skills and removes the necessity for using a BeforeUpdate macro or VBA event  fill the calculated field.  Of course you could do this with a Data Macro in Access 2010 (which would allow you to produce the same result with tables linked from SQL Server or other data sources) but this is an easy and simple solution for native Access tables.  Of course Calculated Fields are not scaleable – but bite me :-).

One use I will take advantage of will be the concatenation of First and Last Name in Full Name format  or First Name/[Space]/Lastname or Lastname/,[Space]/Firstname depending on the requirement.

This is a very simple example, but if you control input by insisting on First and Last Names then this will work reliably and helpfully without ever having to think about it again.  I like that kinda solution 🙂